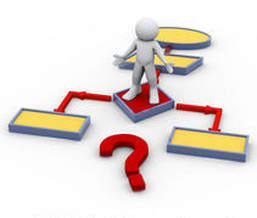 How we get from start to finish
​A Neighbourhood Plan must go through a number of stages before it is finally accepted as a legal document. Here we try to explain the main ones in an easy to understand way, with a chart and some explanatory text. If you want to know more about the whole process you can download more detailed information in the guides section 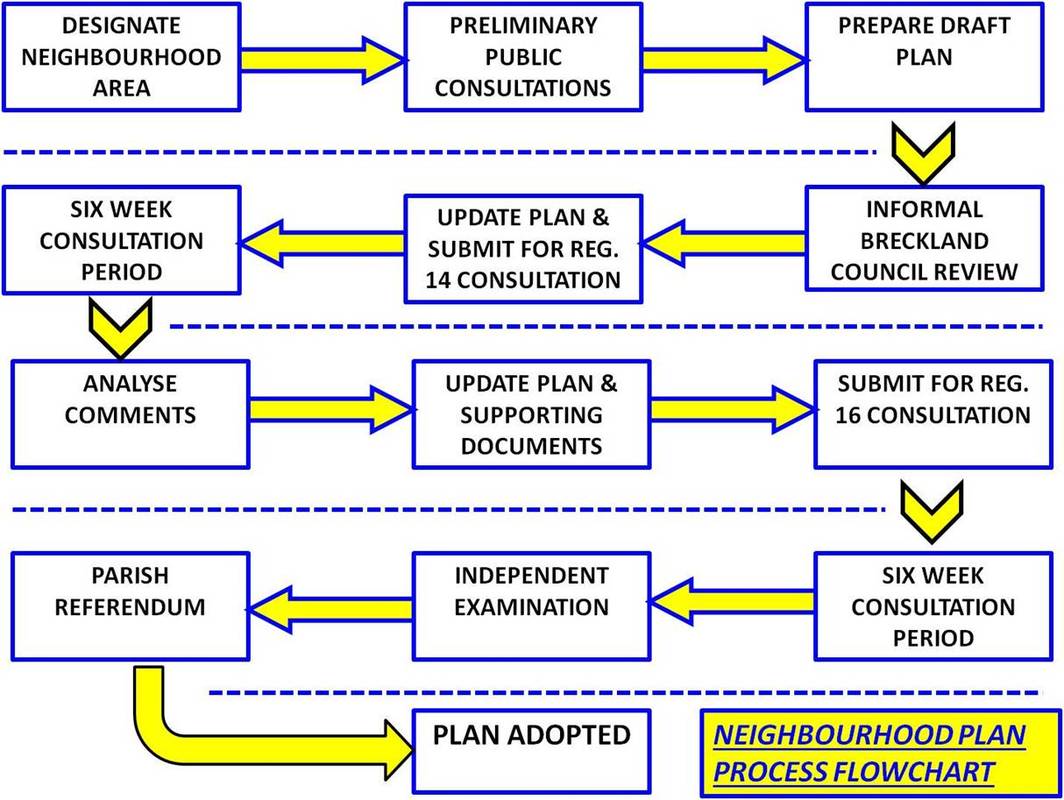 Prepare draft Plan
The Plan sets out the vision, objectives and policies, with other sections to provide a context for those items. This step covers all stages of writing the Plan up to its first formal submission (known as Regulation 14 or "pre-submission"). It also includes preparation of the Evidence Base, and a Heritage Asset Register.

Evidence Base
The Plan's policies must be justified and for convenience this has been done in 13 separate volumes of evidence for the Plan. These document also includes explanation of the policies, and the way in which they are intended to be implemented.

Informal Breckland Council review
This was a voluntary but useful step to get some views on the draft document from Breckland's planning specialists, including their Neighbourhood Planning Coordinator. Two versions of the Plan were submitted informally, the first in February 2017 and then again in July 2017 after it was rewritten based on the first set of comments. We also made a presentation to them of the updated policies in late January 2018, to prepare them for the Regulation 14 submission.

Six week consultation period
Anyone who lives, works or runs a business in the Parish is entitled to comment on the Plan.
It is also sent to a wide range of bodies, known as statutory consultees, to neighbouring Parish Councils, and to organisations such as Historic England, Natural England and the Environment Agency.
During the six week period a series of events will be held to help parishioners understand the Plan better.

Analyse comments
Every comment received was considered, although there is no obligation to include every one of them in the Plan. What was necessary is to show how each was considered and what was done about it.

Update Plan and supporting documents
The Plan was then updated again to incorporate the relevant comments. Evidence of how all comments were dealt with was included in a separate document called the Consultation Statement. At this stage another separate document, called a Basic Conditions Statement, was also be prepared that shows how the Plan meets all the legal and regulatory requirements.

Submit for Regulation 16 consultation
When all the documents are updated the Parish Council submitted them to Breckland Council in accordance with Regulation 16 of The Neighbourhood Planning Regulations. Breckland then publicised that the documents were available for a six week public consultation. At this point Breckland Council took control of the Plan and the Parish Council were not allowed to make further changes without their agreement.

Six week consultation period
Although it was open to all the same people, this consultation period differed from the first in that comments could only be about any points where the Plan and other documents did not comply with regulatory requirements.

Independent examination
Breckland Council then selected three possible independent examiners and the Parish Council chose one of those. Breckland Council sent to the examiner the Plan and its associated documents together with all comments received during the Regulation 16 consultation. No assessment of the comments was required by either Council.
The examiner studied all of the documents and the comments and after a hearing, a visit to the village and some follow-up questions wrote a report giving his assessment. Examination was limited to assessment of regulatory compliance;  the examiner's opinions on any other matters were not relevant. The report was sent to Breckland Council (with a copy to the Parish Council) and gave recommendations for any changes and whether a referendum is justified.
Examination ran from 10 January to 13 July 2021.
Once submitted for examination the Plan could then be taken into account when decisions are made on planning applications.

Parish referendum
Breckland Council then organised a referendum to vote on whether the Plan should be accepted. All eligible voters in Saham Toney could take part. Regardless of turnout if more than 50% vote "yes" Breckland Council must formally accept the Plan as part of its development planning process. The result was a 96.35% vote in favour of the Plan

Plan adopted ("made")
On 15 November 2021 Breckland Council then formally accepted the Plan as part of the Local Development Plan and published that decision. This acceptance is known as the Plan being "made".