SAHAM TONEY NEIGHBOURHOOD PLAN 2019-2036
Proposals to alleviate flood risk
In conjunction with 2 villagers, we have recently put forward ideas for the creation of flood attenuation basins to reduce flood risk to properties further downstream. We have asked the Parish Council to consider these at its meeting of 5 October 2020, and hopefully that will result in steps being taken to implement the proposals. You can find the proposals below

Download File
VILLAGE FLOODING DECEMBER 2020
We greatly sympathise those villagers who again suffered flooding following the prolonged rain during the week before Christmas. Among those were several residents of Cley Lane, who contacted one of our group, who as a result sent a letter to the powers that be, re-emphasising the problems and asking for action to be taken. You can read that letter below (in which some personal information has been redacted) :​

Download File
Both our District Councillor and MP have responded proactively to the letter. Ed Connolly is liaising both with villagers and the Lead Local Flood Authority, and George Freeman's reply setting out what he plans to do, is given below:

Download File
Here is the response George Freeman MP received from Norfolk County Council when he took up village problems with the County:

Download File
In the light of the latest problems, it's a good time to clarify again that the Plan can and does include policies to ensure new developments will not add to flood risk, and includes measures for certain allocated sites that should have the added benefit of reducing risk elsewhere. But that is only part of the problem, and it is important to stress that unfortunately the Plan itself cannot tackle existing problems unrelated to new development.
While it exists, the neighbourhood plan group will always do all it can to support efforts by the Parish Council, villagers and others to alleviate existing problems, but we respectfully suggest that others take leadership in this respect. The time for talking is past and what is needed now is action, by which we don't mean protracted discussions or more 'behind closed doors' work by the specialist agencies that villagers have little or no information about; but instead a simple plan of various measures to be implemented in a practical timescale.
Early versions of the Plan included a Parish Action Point on this topic, which we handed over to the Parish Council in November 2018 for implementation, and while we accept the Parish Council has tried to make progress on this, there have been few  tangible results, as recently re-flooded villagers will attest.
Hence we respectfully suggest the process is 're-energised' by forming an action committee, made up of affected villagers, parish councillors, those landowners who may have opportunities to put in place attenuation measures on their land, and any other interested people, the only prerequisite being that they have the time, will and determination to change things for the better.
FLOOD RISK IN SAHAM TONEY 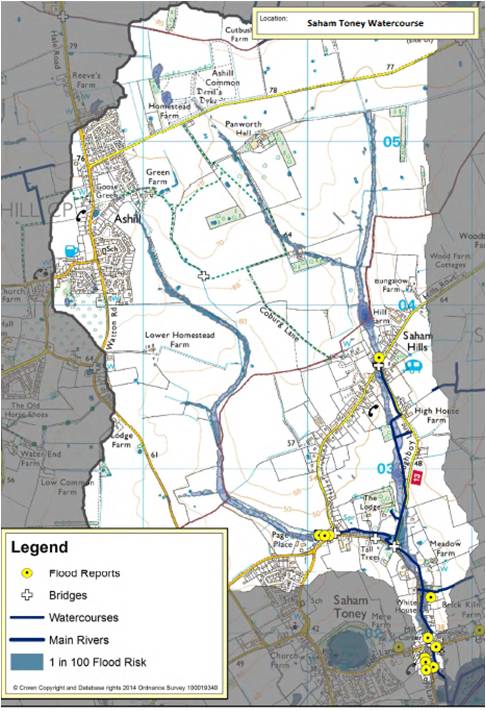 The surface water that flows through Saham Toney and Saham Hills originates north of the Parish in the Ashill area. The main parts of the village affected are along Pages’s Lane, Chequers Lane, Bell Lane and Ploughboy Lane.
Can the Plan prevent future floods? In general, unfortunately, in a word, NO
The Plan cannot solve existing flooding problems, which as illustrated in the map above, sometimes originate in neighbouring parishes. A neighbourhood plan can only deal with the development of land, not the rectification of problems that pre-date such development (except where those problems are on a proposed site itself).
The Plan cannot control Nature, so rainwater will continue to drain via the watercourses shown on the map. In future extreme events, such as the one in June 2016, there is a high likelihood they would again be unable to cope with the volume of water running off the land.
This problem is further exasperated in Saham because groundwater levels are generally high, meaning there is less capacity for water to be held in the ground long enough to prevent overflow of the watercourses and the flooding that consequently occurs.
The Environment Agency publishes an online map that shows areas at high, medium, low and very low risk of surface water flooding, as shown below (the version with the Parish boundary overlay is courtesy Norfolk County Council). You can find the online map, which allows you to zoom in on a particular area, at https://flood-warning-information.service.gov.uk/long-term-flood-risk/ 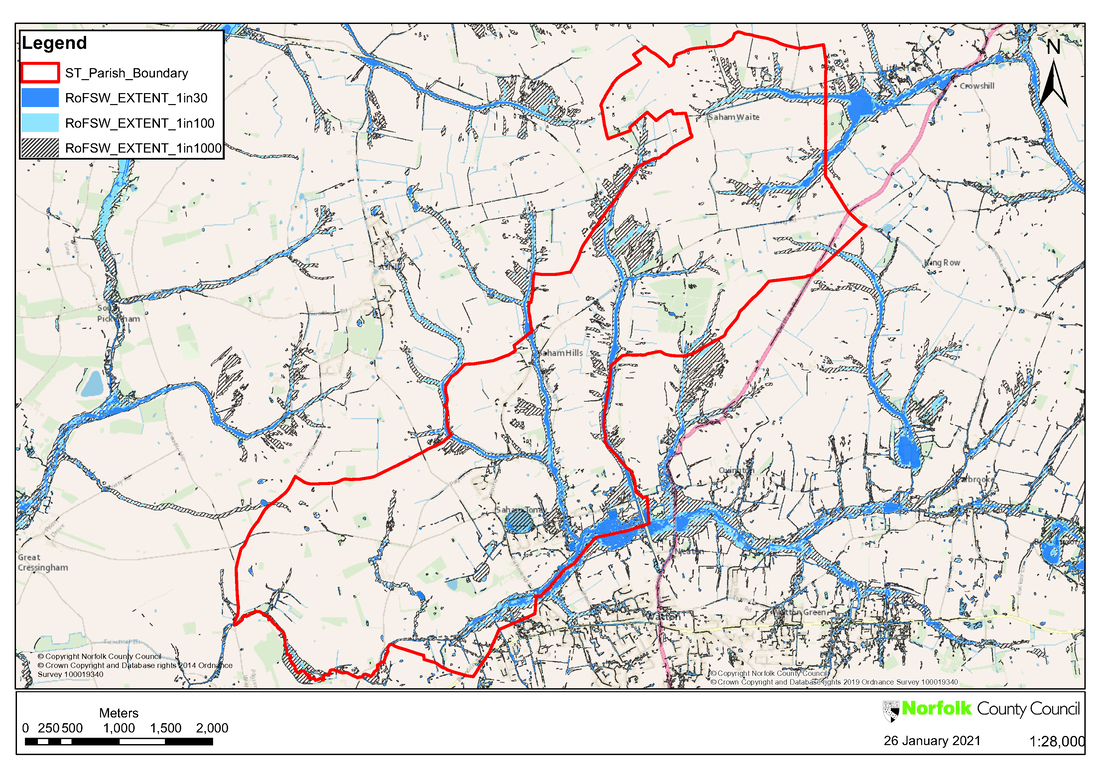 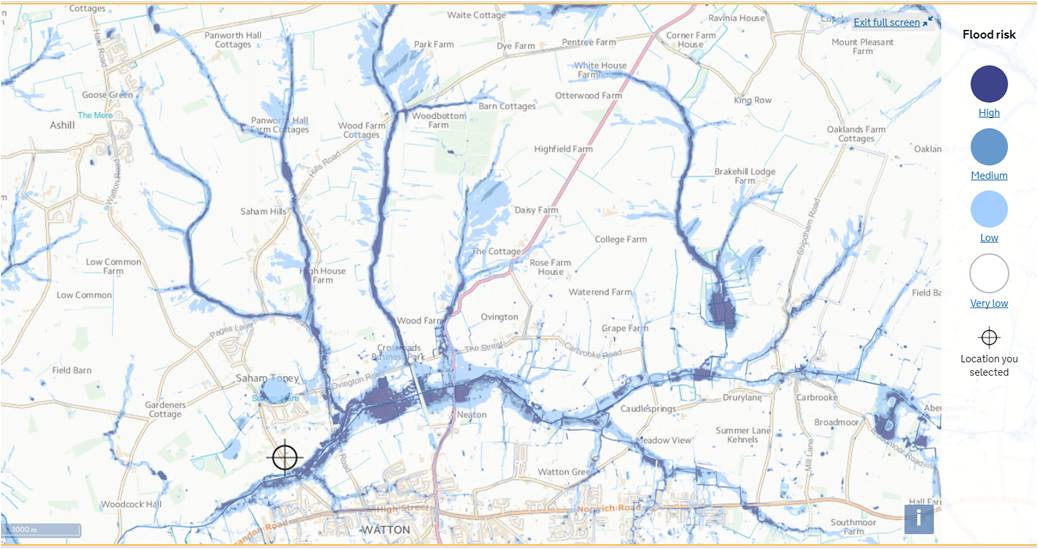 Unsurprisingly, it shows the areas most at risk to be those along the watercourses shown in the first map.
It is important to understand what the Environment Agency means by each level of risk:
High - each year, the area has a chance of flooding of greater than 1 in 30 (3.3%)
Medium - each year, the area has a chance of flooding of between 1 in 100 (1%) and 1 in 30 (3.3%)
Low - each year, the area has a chance of flooding of between 1 in 1000 (0.1%) and 1 in 100 (1%)
Very low - each year, the area has a chance of flooding of less than 1 in 1000 (0.1%)
Why might new development increase flood risk?
If new development, particularly in the areas of greatest risk, happens without adequate control, during heavy rainfall it might increase the rate of surface water run-off to the surrounding area, because permeable ground might be replaced with hard impermeable surfaces. Although the amount of rainfall would not be changed by the development (that’s in Nature’s control), since it would not be able to soak into the ground it could only drain to the nearest permeable ground, or worse, directly from the site onto existing roads or into existing roadside ditches. The situation differs when a brownfield (already developed) site is redeveloped, since it will often already have had impermeable surfaces (concrete hard-standings, for example) that may have increased the rate of surface water run-off for many years.
How do planning rules control flood risk?
The National Planning Policy Framework (NPPF) sets the overall rules for development in England and Wales. In summary it says:
The Breckland Local Plan dictates that all new development:
Can the Neighbourhood Plan prevent increased risk of flooding? YES
When preparing the Neighbourhood Plan, we felt that the national and district planning rules were okay up to a point, but lacked sufficient rigour and clarity, thus leaving loopholes that some developers may (and do) exploit. We wanted to strengthen the good points in the planning rules, and make them more locally specific, while also eliminating loopholes.
How does the Neighbourhood Plan do that?
In Policies 8A-8H and 9, the Plan requires: In essence the Plan aims to make sure that measures are taken to ensure new development does not result in higher flood risk than existed before it was approved.
Additionally masterplanning for allocated sites STNP 1, 4 and 7 (on Page's Lane, Pound Hill and Chequers Lane includes areas of green space, that while providing a pleasant environment, have a primary function as space for the incorporation of surface water runoff attenuation and mitigation measures.
The Plan's policies have been reviewed by a specialist and concluded to be robust in the way they deal with development and potential flood risk. Those policies have been praised and supported by the Lead Local Flood Authority.

We accept and understand that whatever measures the Plan includes, some people will remain concerned by flood risk, and we take their concerns seriously. We understand and respect the case made that there should be no new development until existing flood problems are solved. In answer to that we say this: the removal of sites from allocation in the Plan would not guarantee those sites would not still be developed; but what it would guarantee is that they would come forward in an ad hoc and less controlled manner, without many of the flood risk controls the Plan imposes on them. That is evidenced by many developments permitted over the last 6-7 years, and the often spurious information presented by their developers to justify being granted permission to build in flood risk zones, while not being held in check by any meaningful policies on the topic